​Grace O’Malley (1530-1603), “the Pirate Queen”, is one of the most important figures in Irish history and a source of great national pride. Her many exploits are both legendary and inspirational, with successive generations of people worldwide becoming enthralled with her life history and its legacy. Grace’s biographer, Anne Chambers, describes her as “an accomplished mariner, a fearless leader, by land and by sea, a shrewd political tactician, a successful independent business woman, a ruthless plunderer, a mercenary, a rebel, the protective matriarch of her family and her tribe and – above all else – a woman who broke the mould and refused to allow the barriers placed in her path, either by society or by nature, to deter her from her quest”.
The O’Malley Clan Association is conducting research into Grace’s genetic heritage, in a bid to identify the genetic signature of her immediate forbears. We hope that soon, O’Malleys from all over the world will be able to find out how closely they may be related to her. In so doing, we aim to highlight the importance of genetic heritage, attract the O’Malley diaspora to their ancestral home and draw further attention to the incredible human being that was Grace O’Malley.
On Saturday, 13th August, Dr Maurice Gleeson, a leading genetic genealogist, will present the findings (so far) of this ground-breaking project. He will explain how multiple O’Malleys have combined their historical connections to Grace with DNA analysis to reveal the complex story of O’Malley descent. He will be joined by Anne Chambers, biographer of Grace O’Malley, who will talk about the O’Malley Clan into which Grace was born and how they interacted with the other leading families of the time. The panel discussion, chaired by Newport local historian, Peter Mullowney, will bring together the project, the woman and her impact on Mayo, Ireland and the world.
​
Programme – 13th August 2022
1:30   Open for signing in
1:45   Welcome from Chair Peter Mullowney
2:00   Dr Maurice Gleeson:  The Finding Grace project and results to date, including 10 mins Q&A
2:50   Anne Chambers:   Grace O’Malley and her family connections, including 10 mins Q&A
3:40   Panel Discussion moderated by Peter Mullowney
5:00 pm Close
Click Here to Book Your Place at this FREE EVENT
​THE PROGRAMME OF EVENTS FOR THE 2022 O'MALLEY CLAN GATHERING IS BELOW TO GIVE YOU AN IDEA OF THE TYPE OF EVENTS THAT ARE USUALLY SCHEDULED.
(CLICK ON THE IMAGE TO OPEN OR DOWNLOAD THE PDF FILE)
PLAN YOUR TRIP TO IRELAND FOR NEXT JUNE AND ENJOY A FABULOUS WEEKEND IN COUNTY MAYO! 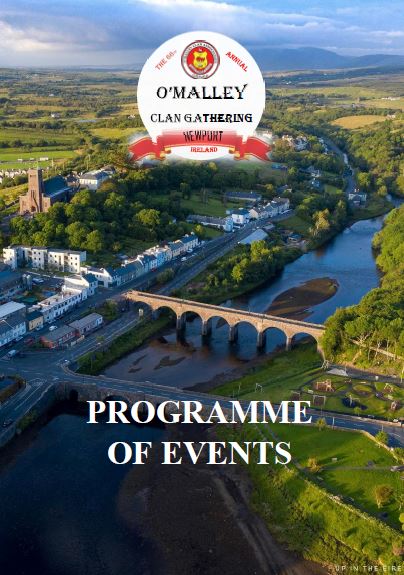 Footage of the Online Gathering 2020